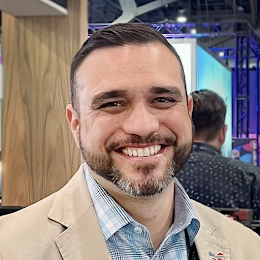 New York, NY – Barbizon, the leader in entertainment and architectural lighting, announced today the
promotion of Jaison O’Connor to Director of Eastern Region Sales. This change supports the growing needs of the Products and Expendables business across the Eastern Region of Barbizon Lighting.
Originally from Trinidad and Tobago, Jaison O’Connor has been with Barbizon Lighting for nearly ten years as the Sales Manager for our Florida and International markets and, most recently, Regional Sales Manager for the Northeast and Midwest. His approach to sales in these regions showed incredible growth. In addition, it earned him the respect of his staff, peers, and industry colleagues, making this transition to the entire Eastern Region a natural next step.
“Barbizon’s most valuable asset is our people and our relationships. Since the day Jaison joined Barbizon as a Sales Manager, he has earned the trust of his team, the loyalty of our customers, and the faith of our manufacturers,” said Tom Madden, President & CEO of Barbizon. “Jaison is a charismatic and knowledgeable manager who leads by example. Given Jaison’s ability to connect with people deeply, I am excited to see how he expands his impact on the Barbizon organization and builds upon his success in this new role.”
Mr. O’Connor will coordinate the Product and Expendables sales for the Barbizon offices in Boston, Chicago, New York, Washington DC, Charlotte, Atlanta, and Orlando.
“It’s an honor to expand my management style and approach to sales while increasing our initiatives in film, broadcast, theatre, production, worship, themed environments, and our retail locations,” says Mr. O’Connor. “I look forward to working closely with our incredible partners and amazing customers throughout the region.”
Mr. O’Connor will be working remotely from the Miami, Florida area and reporting to our newly constructed Barbizon Lighting New York global headquarters. He can be reached at 781-469-1532 or via email joconnor@barbizon.com. Se habla Espanol.
Posted by Barbizon Lighting at Monday, August 08, 2022