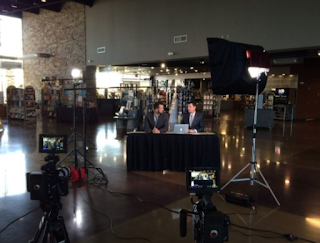 Granger Community Church, based in Northern Indiana, has two campus locations, Granger and Elkhart, as well as an extensive online presence for people around the world to celebrate and access GCC’s message. The church uses a variety of creative and visual arts to deliver their message shooting a wealth of videos created in house. The Visual Arts team at Granger in fact captures and produces a wide range of content for its services and presentations with almost half the videos being storytelling, documentary style works. For many of their video shoots Granger’s team relies on Cineo Lighting products.

Dustin Maust, Director for Film Design, works with a video team that shoots both in the church’s in-house studio and in the field to produce the numerous pieces of video and news segments used for the church’s worship services and online. Maust, who has been working at Granger Church since 2002, recently spoke about why they chose to use Cineo units for both studio and on-location work. “We have a nice range of Cineo products, including HS, Mavericks, LS, and Matchstix units,” explains Maust. “in our inventory for over a year now and we love them. As a full production house we shoot all sorts of style videos—story videos, news pieces, promos, commercials. You name it and we take the Cineos on every shoot because we love the portability of them. They are nice softlight for the shoots that we do. We came from using Kino Flo Diva-Lites, but I prefer the HS; they are more powerful. I feel like they are just a much better soft light and we have much more control than with the Diva.” 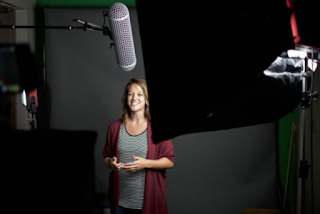 Maust and his video team selected the Cineo gear after seeing the product line at the NAB show while exploring lighting and camera equipment to purchase for their inventory. “We looked at a lot of lights from a lot of companies and the Cineo Lighting products were the ones we really felt worked best for us, we liked what we saw,” Maust comments. “The first thing with any light I do is take a look at the quality light; ‘does it look good? Does it produce the sort of results that I want?’ The HS lights are a great soft source; they’re easy to shape and are powerful. It’s very easy to get plenty of light from them to compete with the natural light coming in from a window for instance. I really like that, especially as we do a lot of location shooting. The other thing about all of the Cineo lights is that they’re built really, really well. It doesn’t feel like you’re compromising at all. They are really well built and engineered well. That they are so portable is a great bonus with the quality of the light.”

Granger Community Church, though in the process of building out a larger studio space, does shoot some15% of their content in a small on-campus studio. “We use the Cineo HS units in our studio and for every weekend service we shoot a news-style piece; one person presenting with a seamless backdrop; just really clean, really simple. We use the Cineo lights for some really soft light. For the balance of our shoots, about 85% of the time, we are on a location somewhere; on those shoots we use the Mavericks, LS, Matchstix, and the HS units as well.”

The high output, paired with the low power draw is a big benefit for the filmmakers of Granger Church’s Visual Arts team. “To get the output that we want out of the HS lights while just plugging into a wall outlet is a big benefit,” states Maust. “To capture the documentary-style videos we often show up at a person’s house or other random locations to shoot. It’s not like we have access to special electrical power. The fact that we can just plug them into a wall outlet is pretty incredible. Our goal in a lot of shoots, is to make the lighting feel as real as possible. Just the other day, we put a couple of the Mavericks outside a window and shot them in; it was perfect. No one knew that the light coming through the window wasn’t daylight. We have found they are very versatile lights.” 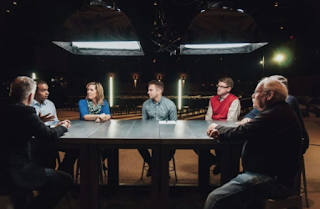 The video team is shooting predominantly at a daylight color temperature, yet appreciate how easy it is to change out the phosphor panels when needed. “I would say that 95% of the time we’re shooting daylight, 5,600K, and using them in tandem with natural daylight coming from nearby windows,” notes Maust. “We do have the 3,200K panels that we can always pop on. That’s another nice feature that the phosphor panels just pop in so you can easily and quickly change the color temperature. In addition to how easy it is to adjust the color temperature, I want to mention the important fact that the Cineo lights are all flicker-free. We shoot some of our work at 200-300 frames per second with our Red Epic cameras. It’s great to have the Cineo lights that give us results that are completely flicker-free.”

Maust and his fellow filmmakers also appreciate the ability to use a camera battery to power the lights when no local power is readily available or if the shoot requires them to stay portable. “There’s a lot of times where we can have a very portable light with the Maverick. We just use a V-lock battery and now the light is easily movable; it’s quick; and you don’t have to find an outlet. We did a video shoot last week and one person was manning the light and moving it where it was needed. That was nice because it kept things moving along and well lit at the same time. It’s really great to have something so lightweight and give a soft light without a lot of work to move it around.”

He finds similar benefits with the Cineo 12” Matchstix lights, “Those lights are great for being able to place them in locations where there isn’t a lot of room for lighting. We don’t need to use them a ton but when we do they are just what we need. We can stick them in tight places and feed them using a V-mount battery. Most of the time we don’t have to go as small as the Matchstixs but I will say what’s awesome about the HS’s and the Mavericks is how thin they are. When we are on a set, we can easily stick them just about anywhere. We find ways to hide them and that’s a big bonus, especially for a softlight. And all of the Cineo lights play really, really well together,” maintains Maust. “To have a really powerful HS and some of the small Matchstix and everything in between is awesome.”

The Granger Church made their Cineo purchase through lighting dealer, Barbizon Chicago, adds Maust. “We’re big fans of Barbizon; they have been great to deal with and we’ve been completely happy working with them. All around it has been a good experience with them and with our purchase. We are really very pleased with the Cineo lights.”