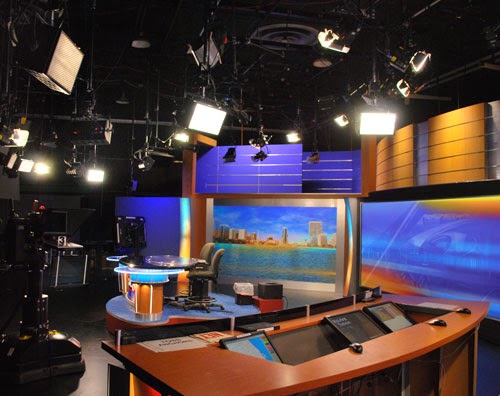 WKMG Channel 6 in Orlando made a conscious decision to become an energy-saving, cost-saving news studio. WKMG reached out to industry leader Barbizon to make their dreams of becoming the first TV news station in central Florida to have a completely LED-based illumination package a reality. Barbizon brought the wealth of industry expertise and broadcast illumination to WKMG’s studio, allowing them to not only save on operating costs but to expand their programming horizons with a lighting package that will deliver a great look and feel to the program feed.

A project of this size and scope would not be complete without a completely tight deadline, and WKMG did not disappoint. Barbizon had two days to not only switch over all conventional illumination to the new LED fixtures, but to install new data paths and a new control surface.

The Barbizon Florida team on the project brought together a great package of bright, broadcast-ready Desisti 50W LED fresnels to cover general illumination within the studio, along with ETC’s Source Four Lustr+ full-color profile fixtures to add any accented colors that the studio uses to make their vibrant shots. Optical DMX data splitters from Pathway were installed to handle the new data traffic to seamlessly control the new full LED package.

Barbizon’s hard work on the project has created a first for central Florida and WKMG – the first studio in central Florida to be lit fully with LED illumination, and all in a two-day changeover period.

In addition to adding a completely LED-based lighting system to the studio, Barbizon brought in a new control surface, the ETC Element, to handle the feature-packed fixtures Barbizon chose for WKMG that would best serve their broadcast and future growth. Barbizon not only completed the install within the tight timeline desperately needed by WKMG, but accurately focused all of the new rig, trained the WKMG staff on the ETC Element, and trained the broadcast staff on accurate operation and maintenance of the new LED package.

If you have an upcoming project or want more information about this installation or to discuss a project, contact Barbizon Florida at 407-999-2647 or your local Barbizon office at 866-502-2724.
Posted by Barbizon Lighting at Thursday, March 13, 2014