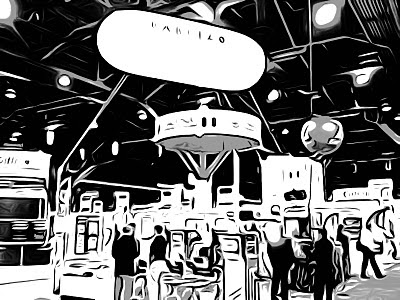 Day two wrapped an hour and a half ago and it was just as busy as yesterday. There's a lot of people in town to see the latest and greatest production gear.
Today we saw a few really cool things of note:
First is Zylight's new variable frost panel. it's a flexible panel with LCD's sandwiched between the panels. An electric charge is introduced and it goes from frosted to clear. Pretty cool. The 2x2 is expected to be in the $400 ballpark range and the 4x4 is in the $1200 range... but final pricing has not been set. All in all pretty cool. BTW the interesting audio track is compliments of an attendee looking at it the same time as us.

Another slick unit was the new Light Panels SolaENG camera top light.
They are saying around $600 list. I am curious about the molded exterior and how they are venting heat but there is a lot of light coming out of this unit. Equiv of 250W tungsten??? I am skeptical, but still pretty darn bright. 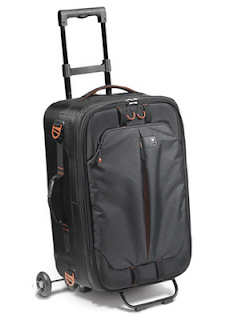 Kata introduced 3 new innovative collections which embody all of Kata's well known and valued attributes, but in addition now pledge to be the lightest most protective photo/video bags. In the new lineup you will find a combination of cutting edge technologies and materials such as: specially formed foam encased spring steel Spine Guard for ultimate structural protection, light yet durable RipStop fabrics & meshes, Aeriform foams and Spider Webbing straps, which join together to provide State Of The Art products which embody the ultimate essences of Lightweight Protection.

Matthews also has put their grip gear in the shrinking machine and released the Micro Grip line.. Here's a pic of Ed demo'ing it on their site. You can see the whole video HERE

It's a great way to move camera lights off axis so your talent doesn't get the deer in the headlights look.

We'll have more info from our team tomorrow and remember if you are here in town Weds will be the last day for the mini classes with Jim Sippel and John Gates in our booth. Here are the times an topics.

Remember we'll have the show report posted soon after the show - links here and on the website.