Barbizon AZ and ETC Create a Booth Students Will Remember 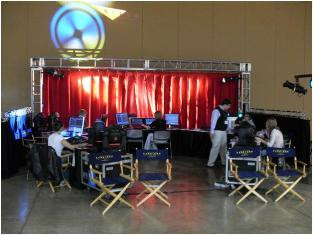 There are two simple facts about America’s Southwest: The Thespian Festival in Arizona is one of the nation’s largest, and Mike Riordan of Barbizon has a passion for teaching high school students about entertainment lighting. Both of these came together this year for an outstanding booth that proved both exciting and educational.

ETC and Barbizon AZ combined efforts this November to create a booth that was unlike anything most of the students attending the 2008 Arizona Thespian Festival had ever seen. In each corner of the booth was an Ion connected to two Mac 250s in the opposite corner of the booth. Crowning the center of the booth was ETC’s flagship console Eos, which was networked to one of the Ions to control some moving lights. With a total of five consoles to work on, this provided students with literal hands-on experience with moving lights.

“Most of these kids have never seen moving lights before and to be able to actually control them live was an incredible experience for them. It’s surprising just how quick kids are these days with learning technology. I showed them the basics and they were off programming in no time!” says David Hilton, Field Project Coordinator out of ETC’s western office. During a Saturday morning showcase session, the Student Leaders from the State Thespian Board borrowed two of the moving lights and an Ion console. Student Kat Enderle programmed a spectacular lighting sequence to accompany the students’ rendition of the music video “Thriller.” Her in-depth understanding of the console and her programming acumen impressed both the house crew and tech professionals in attendance.

Aside from the abundant free time where kids spent hours “playing” with moving lights, there were a number of classes at the booth headed up by Barbizon’s David Empey and Mike Riordan as well as ETC’s Randy Pybas and David Hilton. Classes included Basic Moving Lights, Say Goodbye to Express Hello to Ion, and Life in the Real World. According to David Empey, “We were very pleased to provide an eclectic collection of classes at the Thespian Festival. They were all well attended and we had great teacher and student interaction.”

At the end of the festival there was a raffle where Barbizon provided two pieces of circle truss and ETC provided two Source Four fixtures. With over 1,700 students in attendance, this interactive booth proved to be a huge hit with the kids. As Randy Pybas, Western Regional Sales Manager of ETC, puts it, “The in-booth demo and training format was especially effective. It was great to see these young lighting students genuinely affected in a positive way about the most current lighting control tools our industry has available.”
Posted by Barbizon Lighting at Friday, December 19, 2008