We saw a lot of cool things on the floor the last couple days.. Postings have been delayed because I didn't have a wireless card for the mac and wi-fi in the LVCC is.. get this.. $99.95 for 24 hours.. Let me say that again.. $99.95 for 24 hours. Let's just say based on our bill from exhibiting I was not going to give them any more of our budget. When we get back I am looking into a wireless card.

First... From Light Source.. here's a pic of FOLDING HALF COUPLERS that mount into the standard mounting holes of moving lights..
Folded 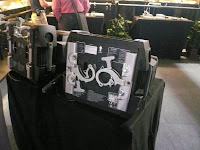 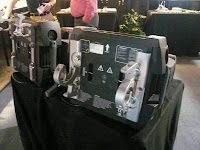 Then @ the FTSI Automation booth we saw a great use for 12" box truss and fabric.. 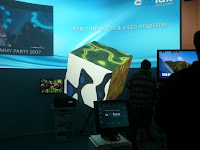 Here's a pic of CoolLux's Pandora's Box Media Server.. it can do all sorts of morphing and wrapping around dimensional surfaces 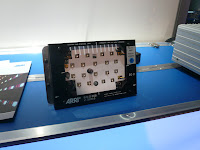 This is Arri's new LED Background Illumination units. They have 100 deg beam angle.. 25W of LED work on a modular 24V powered track system.. I have the brochure but need to scan some images for later posting. 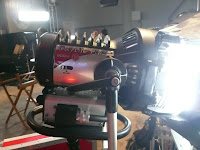 This is pretty neat.. Mole Richardson has a new compact 800 HMI par... the have a 575 in the same form factor also.. Talking with some film/video guys they really like it to use with a soft box because it can keep up with direct sunlight and more importantly can be lifted and put on a stand by one person. Mole says it will be comparable to other 800's on the market.

Ok.. Let's say you have a small club, or a retail space with some LED's but don't need a whole control system with all the bells and whistles.

Check out Interactive Technologies' Scene Station. It's a new family of self-conatined architectural preset stations that directly output DMX to contol LED lighting, dimmers, moving lights and virtually anything else that accepts DMX. This 5 button Decora station can receive a signal from a console and save the looks to any of the buttons.. it also can be programmed with an IR remote. 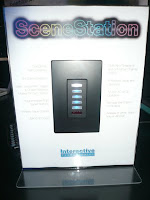 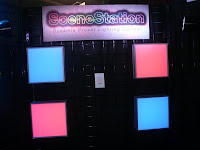 Another interesting thin is that there is a model that with optional ZIGBEE wireless networking that allows a virtually unlimited number of remote stations to work together as a coordinated system.
Check out this T-shirt that JR Clancy is selling with part of the proceeds going to BEHIND THE SCENES. 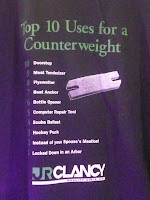