Just as predicted, NAB opened without a hitch this morning. A little after 9AM the masses began streaming into the hall looking for the latest in broadcast technology. 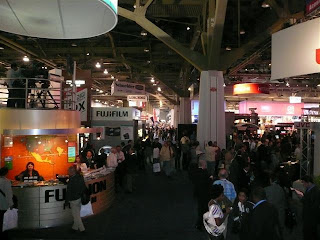 The first day of presentations went well, Both John Gates and Jim Sipple's mini-sessions were well attended. John's color seminar packed the house and Jim's Fun in the Sun with HMI was packed also.. I will get some pictures to post for tomorrow.

Our blue and yellow M&M's again west fast.. we went through 10 pounds of M&M's by the end of the day.. I'll get a pic of them tomorrow.. It's amazing how when people see the machines they are drawn to them.. They're free but when I was re-filling the machine I found $3 in quarters in the bottom. I thought about using them in the slots, but I cannot seem to find a slot machine that takes them anymore!

Tonight is our 60th Birthday party @ the Voodoo Lounge.. I will be there with the camera and hope to get a lot of great pictures to post either later tonight or tomorrow for sure.

First thing tomorrow is our booth meeting.. The Barbizon gang has been out scouring the show floor looking for the latest and greatest new gear.. I will have a report tomorrow on that also.. One thing I noticed in Clear-Com is a new wireless party system that can support 75 SIMULTANEOUS USERS! Crazy Stuff. Kobold has their new all weather 200 HMI, their booth looks like a Jungle. They actually have it raining in their booth. And yes they are using a GFI plug for the power.

We will have more from the floor tomorrow!