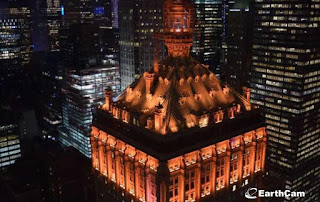 The Barbizon Lighting Company's NYC offices have been hard at work behind the scenes at the iconic 230 Park Ave, Helmsley building, an NYC Landmark, updating the 20th Century building's architectural lighting and control to bring it into the 21st Century.  The new system is comprised of color agile LED fixtures and can be programmed from a central location.

The building is owned and managed by RXR Realty and it’s CEO & Chairman, Scott Rechler, called late this week with an urgent requested that the building be lit for the 2018 Presidents Day weekend (Fri, 2/16 - Mon, 2/19, 2018) in ORANGE in honor of the Parkland shooting victims. Orange is the color of the anti-gun violence movement, which Scott strongly supports.

Here is a link to the live webcam... http://helmsleybuilding.com/building/#webcam

If you are considering an architectural lighting upgrade to your building, Barbizon Lighting Company can help!  Contact us at 866-502-2724 or email us at inquiry@barbizon.com.