What is a three-phase electrical supply? And why do we use three-phase motors for hoisting applications?

There was a great recent mailing from JR Clancy explaining 3 Phase power.. and it's a great primer / refresher for those of us who play with big power. 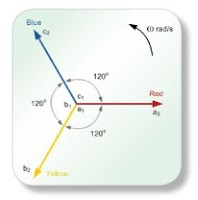 The most common types of electric motors in commercial use operate on alternating current. This power comes from a generator that has three big coils of wire connected 120 degrees apart. The generator causes a magnetic field to move through these three coils sixty times per second.  The changes in the magnetic field induce a current into each coil; the output of the coil is referred to as a "phase" of electrical current. The three phases are often referred to as Phases A, B, and C.

Each phase of current coming out of the generator changes in magnitude, increasing as the magnet and coil get closer, and falling as the magnet and coil get further apart. At the mid-point of its rotation, the output of the coil is zero. As it travels past this point to the opposite side of the generator, the output of the coil goes negative (i.e. generating a strong current in the opposite polarity).

When the output of a single coil is zero, it doesn't have much power to do work- this could be a problem when we are lifting a load and require constant torque to maintain control. In a three-phase system, the magnetic fields generated by the coils are constantly pulling on tile rotor (the moving part of the motor). The three phases share the load and provide a uniform amount of work, allowing us to safely control hoisted loads.

More great information about power and various types of electricity along with neat animated gif's can be seen at http://www.animations.physics.unsw.edu.au//jw/electricmotors.html#three
Posted by Barbizon Lighting at Thursday, July 25, 2013