Barbizon in the News

From a post on today's Live Design Briefing Room:

From Coast to Coast with FLDA 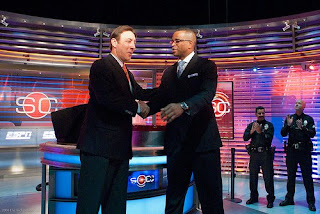 In the sports world, Monday April 6th, 2009 was a very busy day when two national obsessions came together. The championship game of the NCAA, won by North Carolina, was played and the first pitch of the 2009 Major League Baseball season was thrown. As all the action of the day was reported and the highlights discussed fans tuned into the premiere of the new west coast studio for ESPN’s SportsCenter in Los Angeles. 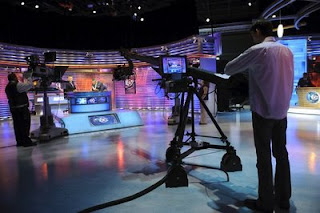 location outside of the Eastern time zone where ESPN is headquartered in Bristol, Connecticut. The new LA facility, located above the ESPN Zone restaurant in the AEG-owned entertainment complex LA Live across the street from the Staples Center, features two studios, three production control rooms, two master control rooms; eight edit suites, a music room, and a voiceover room totaling more than 12,300 square feet. Additional ESPN content will originate from this facility over time, however Mondays through Fridays at 10 p.m. Pacific, it is the live broadcast of SportsCenter LA edition that takes over. The regular anchors are Neil Everett and Stan Verrett with ESPN’s Stuart Scott making special appearances, including handling the first segment that launched the LA studio on Monday April 6th.

Ferri led the lighting design team along with FLDA associate LD Mick Smith and assistant LD Ben Pilat. The production design was handled by head designer Andre Durette of Jack Morton/PDG with systems integration provided by Barbizon Lighting. “ESPN wanted an LA presence,” says Ferri. “They wanted to establish a West coast base. I knew going in that the challenge would be to keep the trademark feel of an ESPN broadcast but still reflect the different energy of the West coast location.”

From a design standpoint, the brief was that the set and lighting had to be instantly identifiable as the SportsCenter set, but it did not have to match it pixel by pixel. Although the set and lighting are similar, there are differences. “Because the set was slightly different, it took the light differently,” explains Ferri. “One of the biggest differences is that the louvers behind the anchors in Bristol are solid Plexiglas® and they are clear and horizontal. In LA, they are angled more and frosted. So the LED uplight that lights them in LA is very prominent, where in Bristol it is very subtle. We were able to get more vibrant colors in LA.” Ferri and his lighting team did however bring a trick from their design on the SportsCenter set in Bristol. “Behind the debate area the main background is red and the graphics on the Plexiglas are blue,” says Ferri. “The panels are treated with Wildfire ultraviolet paint and uplit with Altman Lighting UV PAR fixtures. This helps give some real depth and definition.”

Ferri likes to use new and interesting lighting technology when applicable, especially LED lighting products. For the SportsCenter LA set, Ferri used AC Lighting’s Chroma-Q™ Color Span™, a low profile LED cove lighting and wall wash system. “It is a one and a half story set, with an upper part that consists of a four-foot cyc behind louvers and a graphic panel,” Ferri explains, “We used the Color Span to light that upper portion of the set. The Plexiglas louvers were lit by a JamStar Lighting Elite LED PARs, which are very small and compact and do not flicker on camera. That is a very, very important property for units when they are used for broadcast.”

Ferri feels that FLDA was successful in achieving ESPN’s goal of “making a set that was instantly identifiable as the SportsCenter set, yet was not exactly like Bristol and was still visually interesting.” Whatever coast you are on or even in-between you should be sure to catch the latest exciting addition to ESPN’s sports coverage.
Posted by Barbizon Lighting at Thursday, April 30, 2009